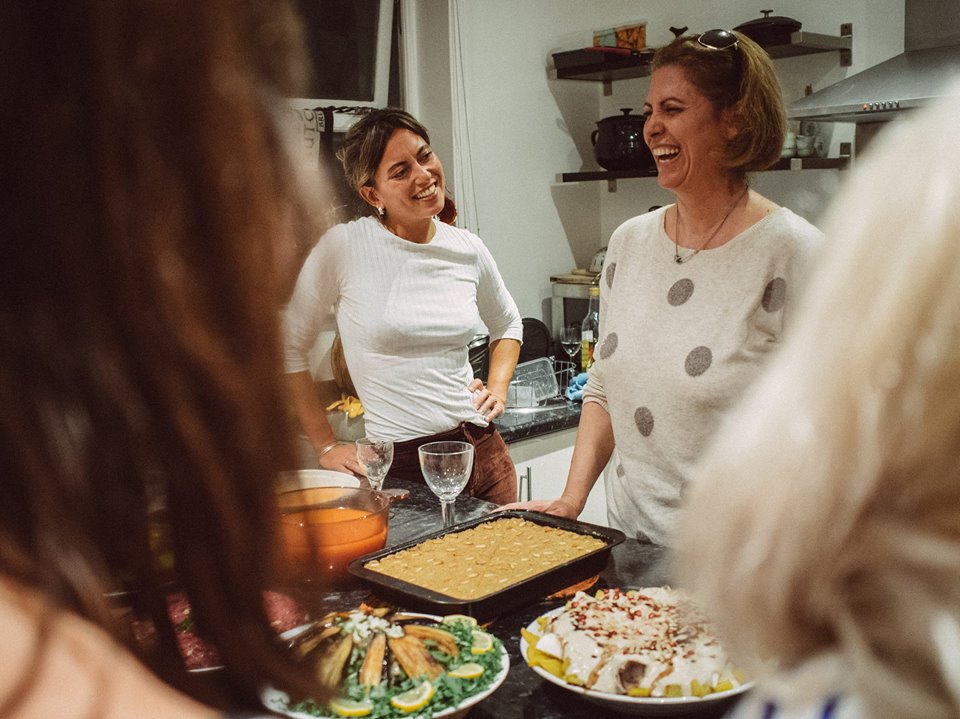 Majeda was imprisoned by the Syrian government for helping to feed people whose homes had been bombed in the war. She managed to escape Syria and now uses food to continue her activism in exile.

I first met Majeda a few weeks after she had arrived in the UK in 2017. She had been working as a children’s therapist when the war broke out in Syria in 2011. She and her family had lived a happy and privileged life in a big house in Damascus. Thousands of displaced Syrians were arriving in the capital where she lived having had their homes bombed by the Syrian government. Majeda organised an initiative to feed them. As a Christian middle-class woman it was easy for her to cross the different checkpoints and get food to those who most needed it. The Syrian government then discovered what she was doing and imprisoned her for four months, with the reasoning: “it is a crime to feed the Syrians from areas occupied by the opposition – we want to leave them to die”. After she was released she continued her support for internally displaced communities. Eventually threats from the state became too much for Majeda and her family. “I couldn’t bear to see my children hurt. It was so hard to leave Syria, but I had to do it to protect my family.”

Those first few months of getting to know Majeda I could see she was grieving for her country. She would say to me “I wish I were in Syria now, I know my country needs me and I miss my two boys and husband so much”. I remember at one of the first Migrateful chef training groups it was her birthday and so we lit some candles and sang happy birthday to her. She burst into tears. She explained to the group: “I skyped my boys and my husband this morning. They had made me a birthday cake in our home in Syria and sang to me and then they all blew out the candles for me. I appreciated it so much but it also made me feel really sad because it’s not the same when I can’t touch them in real life.” She also told us how much she appreciated our cake: “I don’t have my family here, so for now you’re my family and I really appreciate it”. As she blew out the candles I said “Make a wish!” and she replied “To see my boys again and for the war in Syria to end!”

The next month Majeda decided to do this same act of kindness to a woman under siege in Eastern Ghouta in Syria. At the Migrateful chef training group, Majeda stood up, and announced, “My people are dying in a siege, we need to help them. I never thought I would find myself living in the UK. But here I am and I want to do everything I can to help my people. Right now there are 400,000 Syrian civilians under siege. The siege first started in 2012 in Ghouta and 5 years later it continues. The living conditions of the civilians in the surrounding area have reached a critical stage. The Assad regime hopes that if more and more people die from hunger the opposition will eventually surrender. The Syrian people don’t care who wins, we just need the siege to stop so these innocent people can have access to clean sanitation, food and medical services.”

I suggested to Majeda that Migrateful could organise an event where she could speak to people about the siege and ask them to write to the UK government to help. The event was called Siege Soup for Syria. Majeda cooked up over 100 portions of the soup which was the only food that people in the siege could eat. We skyped a woman inside the besieged area. It was her birthday and so Majeda lit candles on a cake for her and everyone in the room sang to her. At this point the woman on the screen started to cry, clearly overwhelmed by seeing 100 faces on her computer screen singing happy birthday to her. At that point I started to tear up and as I looked around the room I saw many other people were crying too.

Majeda brought the Migrateful idea to life in an incredible way – she was amazing at leading her cookery classes. I remember one evening she told the group “I believe there is a relationship between cooking and love and that preparing a meal for the one you love, combining your skills and your feelings to create something, can convey a lot to the person: be it husband, children or friends”. She skyped her two boys every day before breakfast, lunch and dinner, and I knew she would do anything to be able to cook for them, and instead here she was cooking for us so lovingly. That night Majeda said to me “One day my boys will come here and I’ll be able to cook for them again.”

People would leave Majeda’s cookery classes newly politicised about the Syrian situation. In December 2017 Majeda got refugee status and her two boys have now come to join her. Majeda felt so inspired by her experience teaching Syrian cookery classes with Migrateful that she has now set up her own Syrian catering company called the Syrian Sunflower Kitchen. Majeda said to me “I am a Migrateful success story”.

This aubergine dip can be served with flatbreads as part of a meze platter. If you can, do cook the aubergines on the gas or over a BBQ as it adds a delicious smokey flavour, but an oven grill will also do the job.

2. Trim the tops off the aubergines and remove the burnt skins, by either peeling them off or cutting the aubergines in half lengthwise and scooping out the soft flesh.  Place the flesh into a sieve and leave for 10-15 mins to drain off excess liquid. Transfer to a bowl and mash until smooth.

3. Mix in the yogurt, tahini, garlic, pomegranate molasses, salt and all but 2 tablespoons of the parsley. Check the seasoning.

4. Cover with cling film and transfer to the fridge to chill for at least 30 minutes to allow the flavours to develop.

5. When ready to serve, uncover and arrange the tomatoes over the top. Sprinkle with the remaining parsley and drizzle with the olive oil. Serve with pitta bread.

Fattoush is a Syrian bread salad made from toasted or fried pieces of khubz combined with mixed greens and other vegetables, such as radishes and tomatoes. Fattoush belongs to the family of dishes known as fattat, which use stale flatbread as a base. Khubz bread can be found in any Turkish or Middle Eastern shop.

The Beyond English Club