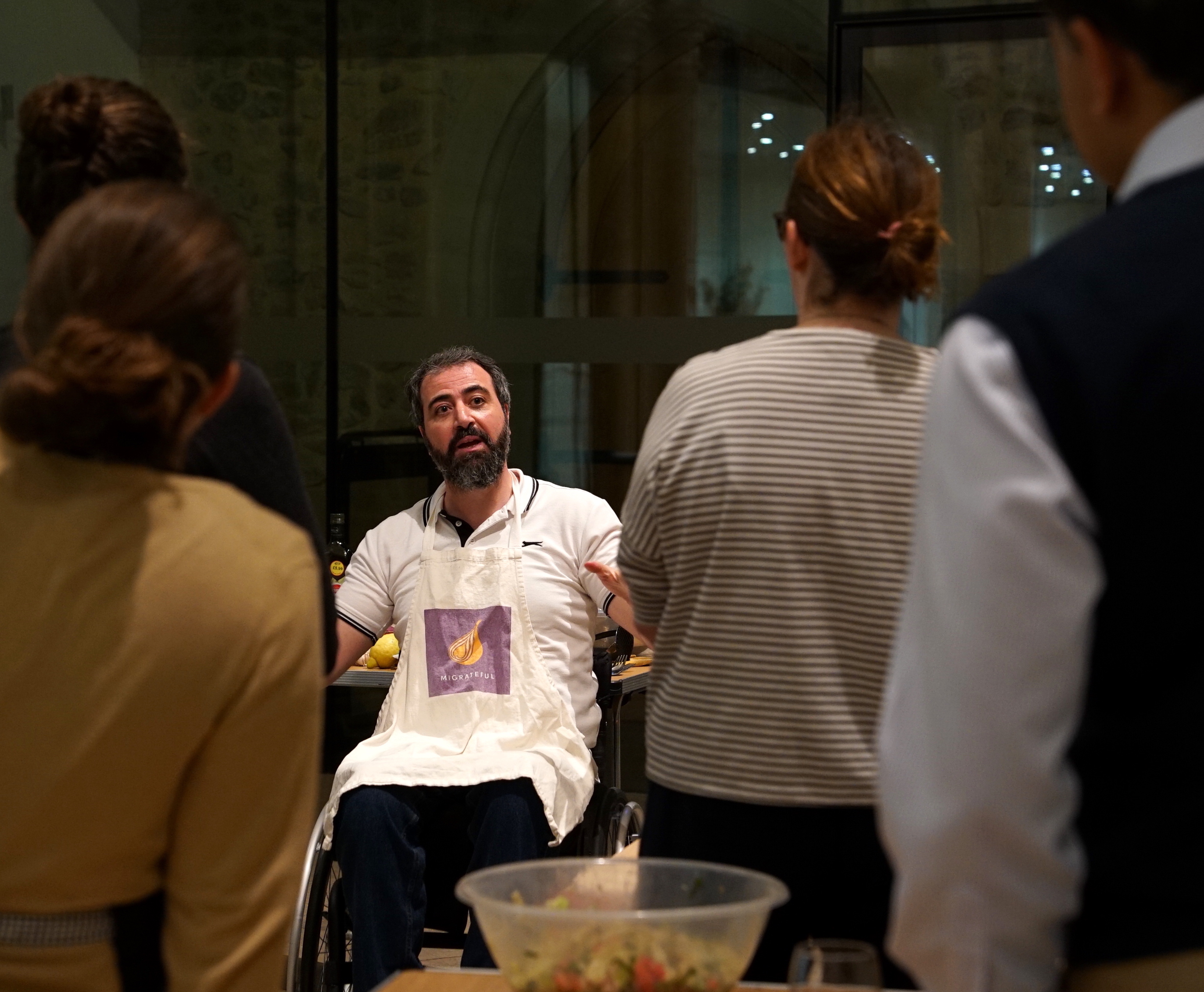 Ahmed was shot during the war in Lebanon and will now use a wheelchair for life. He shares with us why he will never give up.

Ahmed asked me, “What are you most scared of?”

It was not a question I had thought about before. Finally I replied ‘I’m scared of the people I love dying’.

‘Exactly’ Ahmed said “Me too. And when your greatest fear happens it changes everything. It puts everything into perspective. If I had to choose between seeing my mum again for 5 minutes or not being paralysed I would choose to see my mum again. I was 16 years old when she died. She had to take medication every night for her heart. I was the one who used to give it to her. One night I wasn’t there to give it to her because I was at a music concert. I thought my auntie was looking after her. That night she died of a heart attack. I still haven’t forgiven myself. That’s why I trained with the Red Cross to become a paramedic, to stop people like my mum dying”.

In 2008 Ahmed was shot twice by a member of the Shia opposition during the internal conflict which broke out in Lebanon between the Sunni and Shia Muslims. “I was 24 years old the day I became paralysed. I was on my way to work a night shift. I was just opening my car when a man pointed a gun at me. I put my hands in the air and said ‘I’m Ahmed Sinno and I work for the Red Cross please don’t shoot me.” Then I fainted. I woke up in the hospital. When I pulled the hairs on my thighs I couldn’t feel them. That’s when I realised the shooting had paralysed me”.

“That same day 8 people were killed in my town. It was a planned attack. The opposition were hiding in the restaurants then at midnight they started attacking. I should never have left my house that night. We had heard warnings of the attack, but I was determined to get to work because I knew the Red Cross needed me. Also I should never have told the gunman my full name: Sinno is the name of one of the 7 biggest families that support the prime minister and the Sunni regime. In case you don’t know – the Shia Muslims want to take the power from the Sunni Muslims.”

8 years later in 2016, Ahmed encountered a road block manned by the same gunman who had shot him. Later that day Ahmed was followed and shot at by a gunman on a motorbike. Ahmed fled the country leaving behind his fiancée and his job.

“I’ve been in the UK since 2016. It’s been really hard. I loved my life in Lebanon. My fiancée has now got married to someone else. The second shooting happened in May 2016. I was going to get married to her in July 2016 but I had to leave before my marriage. I’ve lost everything. Back in Lebanon I had a very senior position and a good salary. I just really hope the Home Office accept my asylum claim soon.”

“I used to be an extremely sporty person before the shooting; hiking, hunting, scuba-diving. Sport was what made me feel alive. I was a very good long distance runner in my youth.”

This summer Ahmed and I have a few trips planned. I kept calling him to check “Are you ok to go on a Megabus? Are you ok to be lifted onto the stage at WOMAD festival? Are you ok camping? Are you ok if there is no disabled toilet?” Ahmed said to me “Jess you clearly don’t know me, I can do anything in my wheelchair, there is nothing I can’t do.”

“My older brother taught me to be like that. If I said to him that I couldn’t do something because of my wheelchair he would say ‘get up there is nothing wrong with you’. Thanks to him, being in a wheelchair hasn’t stopped me doing anything so far.”

I asked Ahmed “what has your experience taught you?” He replied “That life has many different stages. One moment you’re up and in the blink of your eye you’re down. But you must never give up. Every stage involves a new version of you. There’s always a light at the end of the tunnel. What’s happened to me in my life has taught me that sometimes life throws strange things at you. I believe life gives you the message for a reason, only time shows you the meaning of this message. I feel very grateful for my life. I know that I’m still better off than a lot of other people.”

“I feel hopeful that the Home Office will accept my claim soon. In the meantime Migrateful has given me something to look forward to. As an asylum seeker I can’t work. I have no reason to wake up early. But luckily I have my cookery classes – they give me something to plan for.”

These pastries are extremely popular in Lebanon, and a staple for most families. You will find the triangular pastry leaves in middle eastern stores. The feta is naturally salty so don’t add any extra salt. You can add a little black pepper if you like.

1.   Break down the feta with your hands, mixing in the olive oil and the parsley.

2.   Use the wraps one at a time, leaving the rest in the packet, or under a damp towel, or they will dry out and crack.

3.   With the point of the triangle away from you, put a spoonful of the cheese mixture about 3cm from the bottom of the triangle.  Form it into a narrow cylinder about 8cm long. Fold over the bottom of the pastry. Push down at each edge of the cheese and fold the edges into the middle then continue to roll, tucking in the sides if necessary. Roll reasonably tightly. Don’t overfill with cheese or it will ooze out when cooking.

4.   Finish with a dab of water on the point of the triangle in order to stick the pastry.

5.   Heat the oil in a deep frying pan or saucepan. Cook the rolls in the oil, turning occasionally for c 3-4 minutes until golden brown. Drain on kitchen paper

Combine all the ingredients apart from the water and mix well. Incorporate the water little by little until the consistency is creamy and smooth. Decorate with mint leaves. Serve with falafel.

The privilege of home