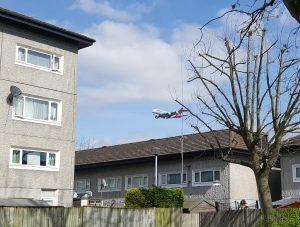 As part of the Year Here Fellowship, our team was asked to carry out a two-month consultancy project in the Meadows Estate, one of the most deprived estates in the UK. Home to 1755 residents, the estate is located in the borough of Hounslow, famed for its appearance in the film Bend It Like Beckham. Conversations are often interrupted by the unbearably loud sound of an airplane landing or taking off. You feel as if you are in the middle of a Heathrow runway – you practically are. One girl tells me “Pizza Hut refuses to deliver here because it’s so rough”. Her friend adds “nobody is doing anything worthwhile here, there’s at least 800 heroin addicts”. A highly unlikely statistic but a telling perception. Other residents tell me about traumatic burglaries, syringes in the park and muggings in the dark due to broken street lights. I meet Bertha in front of her porch who tells me, “I’m moving off the estate. Yesterday, my dog was brutally attacked by a junkie’s dog”. While she’s talking, a woman starts to thump on the door across the road, howling “Mum, mum please give me my children back!”. Bertha appears not to notice and continues “there’s dangerous dogs on this estate because it’s full of dangerous people!”.

Since 2010, severe deprivation in the area has worsened. 43% of children are living in poverty compared with 19% across England. A recent report argued that the reason unemployment, state benefit-dependency and mental health conditions are so common here is because residents lack the social networks necessary to build emotional and economic resilience. Our task was to help residents form these networks by inviting them to events at the local community centre, namely ‘the Hub’. We knocked on around 600 doors and had lots of different conversations; some inspiring, some infuriating and many heart-breaking. 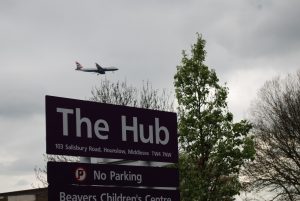 We heard many reasons why people couldn’t come to our Hub events. One woman explained “I’m expecting the bailiffs over the next few days. I’ve been too depressed to work and couldn’t pay the bills”. An elderly man responded, “I’m too sad to leave the house – ever since my daughter and dog died three months ago”. He watched me knocking on his next door neighbour’s door and shouted over “She’s out! You see that new door? The Police installed it last week because her partner kept beating her up”. An Indian mother named Anika replied “I can’t come, my ex-husband is coming out of prison that day. He strangled me in front of my own mother when I was pregnant”. She shares that she’s finding being a single mum really tough. “We have no curtains or carpets or furniture, I can’t even afford clothes for the kids”.

Considering what these individuals were going through, it wasn’t surprising that they didn’t feel like coming to our events. What surprised me more was how often residents talked about not feeling welcome in the Hub due to their ethnicity. Tina, a Nigerian woman, told me, “I’d like to come. But I wouldn’t feel welcome. My neighbours don’t like me because I’m black”. Jolanta, an 82-year-old Polish woman revealed “I can’t come to the Hub. People will laugh at my accent”. Anika declared “I’ll come as long as my next door neighbour isn’t there, she doesn’t like Asians. She’s only kind to white people”. Valerie, an elderly white British woman told me “I never leave the house, the residents hate me because I married a black man. Me and Tony used to get called all sorts of racist names”. A young white mum named Suzy insisted, “I’m not racist. It’s just the Somalis who piss me off. They never move out of the way, they drop litter and they spit. They hang out in the Hub, that’s why I don’t go there”. 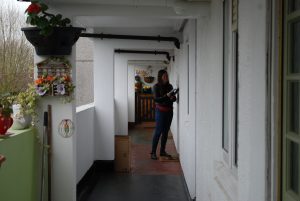 In the midst of ethnic tensions, crime and poverty, it was perhaps no surprise that community cohesion was a challenge. The most pessimistic response came from a group of white British elderly residents at their weekly coffee afternoon. Angela told me “It’s impossible to get this community to do anything. We’re a white minority now. And the migrants don’t want to mix”. Joyce continued “I hate it. I feel like a foreigner in my own country. I get on the bus and I hear all these different languages and I just want to scream ‘get out of my country!’”. I’m trying to think how best to deal with this conversation. I decide to challenge them indirectly by asking them why they think migrants have come to the UK. Mary jumps in “for the hand-outs of course!”. I continue, “a lot of migrants come to the UK because they’re escaping poverty or in some cases conflict”. Maureen reacts “Poverty! Have you seen the poverty on this estate?”. I explain that I’m not denying that there’s poverty here, but that in some other countries poverty is a lot more extreme. They reply, “We don’t mind refugees, but it’s all these migrants on the estate with their new phones and fancy shoes, they’re not poor. And as for those escaping war, we’ve read all about the men who leave their wives and children to be slaughtered whilst they live the good life in the UK, it’s disgusting”. I share with them that I’m finding this conversation quite difficult. Maureen replies “Jess, you’re judging us for how we feel, but you haven’t lived in our shoes. Our values are so different. The real refugees are grateful but these people are not. We pay taxes on our pension and where does it go? Straight to the migrants!”.

I couldn’t stop thinking about this conversation. Hearing them talk about their dislike for migrants helped me to finally understand why the Brexit vote happened, to the disbelief and despair of most of my generation. When reporting this conversation to friends they challenged me to be more compassionate. So I did some more listening. One girl told me, “it took me nine years to get a house and I’ve lived in this country all my life. I couldn’t help but feel frustrated that the foreigners were getting housed before me”. Lois, a very talkative, elderly woman told me, “what bothers me is that I feel left out. I see the days when the Sikhs and Muslims wear fancy robes for a celebration, but they don’t invite me. And they never come to our Easter celebrations”.

Undeniably the white British population have seen some huge changes. Since they moved onto the estate in 1971, the percentage of white British residents has gone from over 80% to 41%, not to mention the quantity of passing airplanes more than doubling. Residents who arrived in the 70s and 80s, talk about the good old days living in a close-knit community where everybody knew each other thanks to well-attended church events and the priority given to housing the off-spring of existing residents. As explained by Claire a social worker, “the problem is that ethnic groups have been dumped here with nothing done to assist their process of integration”. The white British community feel resentful for the loss of community whilst the migrant population feel they are victims of racism.

We started thinking about what kinds of events could bring these two groups together, to help them understand one another. We came up with the “Neighbourhood Lunch” – inviting residents to sit with someone of a different generation and most likely a different ethnicity, to share food and stories. Talking about universal human emotions such as pride, joy and sorrow, could help these individuals realise that beyond the cultural divisions we are all fellow humans. I knocked on Maureen’s door to invite her but she slammed the door in my face. Frustratingly, it seemed that the very individuals which this event was designed to help were too close-minded to come. It was perhaps partly my fault for being too forth-coming in response to their anti-migrant views. 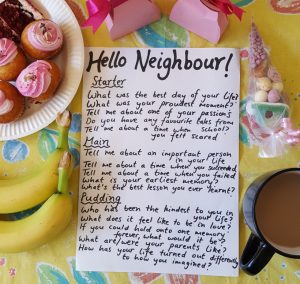 In the end the lunch was a success. After much door-knocking, 40 people attended from diverse backgrounds and age groups and there was lots of mixing between ethnicities. Admittedly one elderly white British man said, “I wish I hadn’t come, I don’t like ‘mixing’. And I hate curry”, but apart from him, everybody loved it. The lunch demonstrated that despite all the talk on the door step of ethnic tensions, parts of this community really want to come together and get along. Hounslow Council said they’ll do their best to fund a community engagement worker to continue the work that we’ve started. In my opinion, the government needs to be actively funding these kinds of community initiatives which facilitate integration. Something as simple as the opportunity to come together and talk, and forget about the planes and the prejudice, could be a step towards forming a peaceful community which celebrates diversity and provides individuals with the social networks they need to build emotional and economic resilience.

*All names have been changed
Special thanks to Giuliana Mazza-Coates, Charlotte Whittaker, Miriam Chapman, Paavan Buddhdev and Emily Greenslade