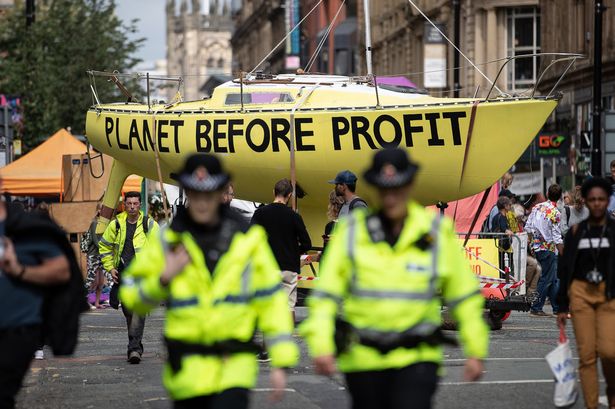 Hello I’m Jess Thompson, the Founder of Migrateful. Migrateful runs cookery classes in London and Bristol led by refugee chefs struggling to integrate and access employment due to legal and linguistic barriers.

As a type one diabetic, I am subject to an annual eye scan. This summer, the results came back with evidence of eye damage. I was told that if I didn’t improve my diabetic control immediately, I would risk being blind in 10 years’ time. This news felt very reminiscent of the rhetoric encountered in the climate change debate: ‘if we don’t change our behaviour now, we will witness extreme changes to our weather systems in 10 years’ time’. Despite really wanting to save my eyesight, I often find myself falling into old ways; it would seem that what I want does not always translate into how I act. Similarly, even though 97% of climate scientists agree that climate change is human induced and requires immediate action, millions of people are still failing to respond.

There are key underlying differences in the comparison between my eyes and our planet. Theoretically speaking, it should be much easier to counter an individual threat to one’s own personal survival than to overcome a collective threat to humanity’s survival. When discussing climate change and the Extinction Rebellion movement at the Migrateful chef training group, the chefs pointed out to me that the very choice to be able to stop climate change is a privilege. “We feel completely disempowered to stop climate change happening in Ethiopia” explained our Ethiopian chef who is watching her nation suffer as climate change dramatically increases the frequency of droughts. “Imagine how it feels when the threat you face is completely out of your control, which is the case for the hundreds of nations who are at the mercy of countries like the UK producing so many carbon emissions”. To take their point into the comparison between my eyes and the planet – I should feel grateful that I have diabetes and not a terminal disease. I have the privilege of choice to change my consumption habits and overcome the threat of blindness. When it comes to climate change, the majority of the world’s population are not responsible for producing the carbon emissions causing climate change and do not hold the power to prevent the devastating impact it will have on them. Our Filipino chef concluded “You here in the West have the power to stop this crisis, that power is a real privilege.”

In 2017, 18 million people were forced to flee their homes because of a natural disaster – this amounts to 61.5% of global displacements in total in 2017. By 2050, it is estimated that between 150 to 200 million people will become “climate refugees” as a result of desertification, rising sea levels and extreme weather conditions. To put this figure in perspective, this would mean that by 2050 one in every 45 people in the world will have been displaced by climate change.

“If Europe thinks they have a problem with migration today… wait 20 years,” said Brigadier General Stephen Cheney, a retired member of the US Marine Corps. “See what happens when climate change drives people out of Africa – the Sahel [sub-Saharan area] especially – and we’re talking now not just one or two million, but 10 or 20 [million]. They are not going to South Africa, they are going across the Mediterranean.”

The world is already failing to respond to the current refugee crisis, never mind responding to the scale the refugee crisis will reach due to climate change. The current global legal and political systems, do not even consider there is such a thing as a climate refugee. A family recently tried to claim asylum in New Zealand after their home was inundated on the pacific island where they lived, the New Zealand Immigration authorities rejected their claim as they do not accept asylum claims when the reason you cannot return to your country is due to an environmental disaster. Almost no-one is making any preparations for how to respond to the millions of soon to be climate refugees who will soon be needing a new home.

Our chef from the Philippines commented “I am feeling very shocked about the increase in the frequency of hurricanes in the Philippines. When I was growing up this didn’t happen. We are all really scared. We can feel the change already. My parents are very worried. Seeing the Extinction Rebellion protests fills me with hope – I am glad people are protesting to stop this, we feel really powerless in the Philippines to do anything to stop the process”. The Global Peace Index 2019 showed that The Philippines is the most susceptible country to hazards brought about by climate change. The Philippines was followed by Japan, Bangladesh, Myanmar, China, Indonesia, India, Vietnam and Pakistan. Our chefs from China, Bangladesh and Pakistan all talked about the increase in frequency of natural disasters. They all felt very fearful for their friends and family, and also powerless to know how to stop things getting worse.

On the subject of protesting, our chefs reminded us what a privilege it is to be able to go out on the street and protest. Our Egyptian chef explained that in Egypt you get 7 years in jail for protesting. Our Iranian chefs said that in Iran the punishment for protesting is death by stoning. Our Chinese chef pointed out that if you protest in China you will receive restrictions to your travel and be sent to a labour camp. Lola our Cuban chef said part of the reason she left Cuba is because when she attempted to protest, the state publicly humiliated her and she had friends who were put in prison. Our Syrian and Eritrean chefs said it was a similar story in their countries.

Our Ecuadorian chef said that her Ecuadorian community back home felt very frustrated by Greta Thunberg rise to fame. “Our indigenous communities have been crying out to protect our ecosystems for years. Our voices are ignored. And then suddenly a wealthy white girl stands up and everyone listens. Her message is really important, but it highlights to us how undervalued our voice is in this global order.” My conversations with the Migrateful chefs made me think about the importance of recognising our privilege here in the UK in being able to protest about this crisis. Secondly our privilege in having the choice to reduce our carbon consumption. In Greta’s words we are “the lucky ones”. Billions around the world will live the consequences of our actions. Every day the Migrateful team confront the tragedy of our current refugee crisis and the UK’s hostile environment. If we don’t act to stop climate change now the number of refugees will increase by tens of thousands over the coming decades. This is why Migrateful supports Extinction Rebellion’s International Rebellion demanding that the government responds accordingly to this crisis whilst there is still time.

Why Can’t we #lifttheban? Questioning the UK’s Work Ban on Asylum Seekers