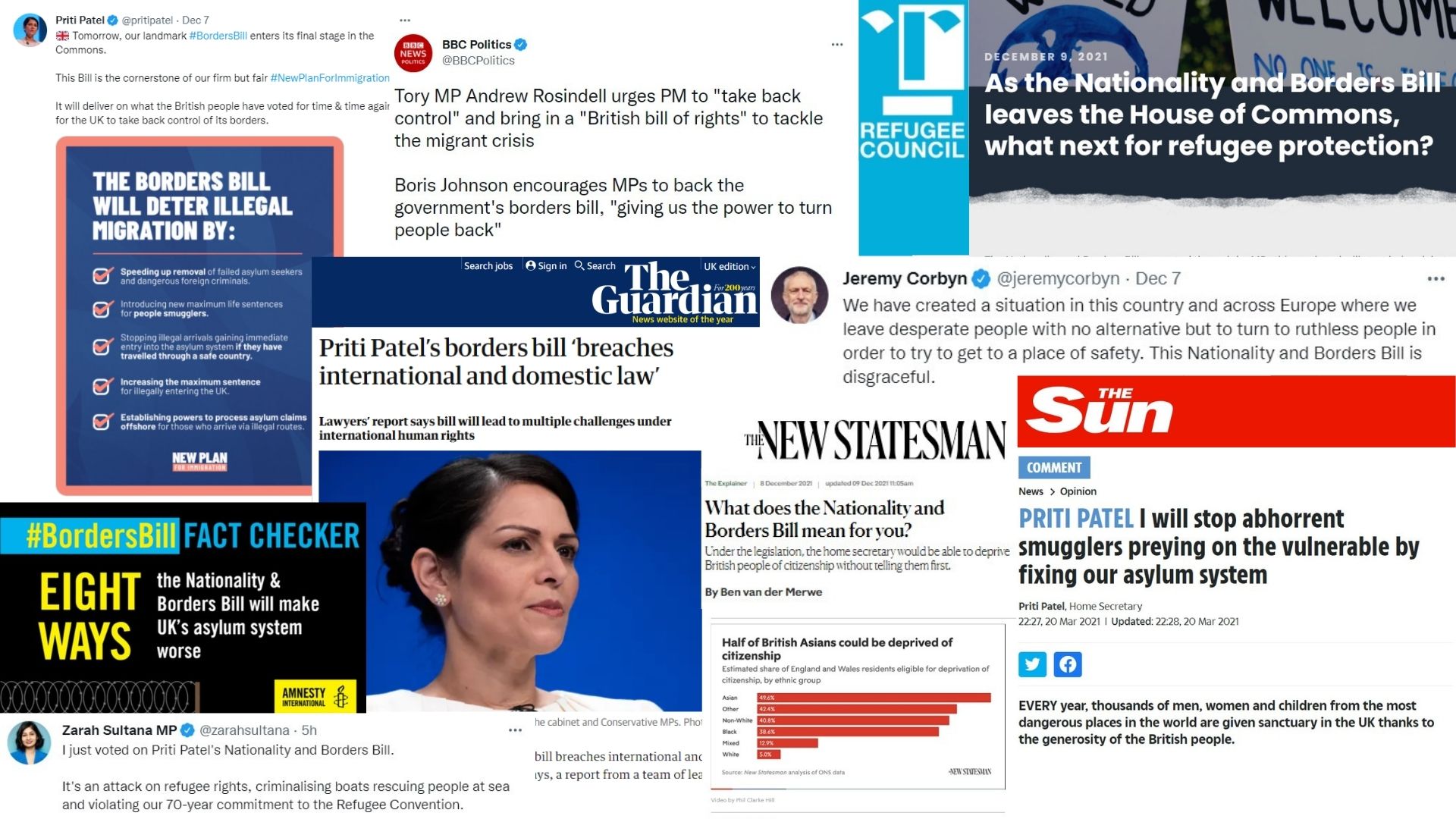 Written by Migrateful volunteer, Carina Low. You can find her on Twitter @carinalow

On Wednesday 9th December, a bill was passed through UK parliament which has been described as an attack on refugee rights and in breach of international law. The Nationality & Borders Bill includes changes that would mean residents could have their citizenship stripped without notification, people rescuing refugees could be prosecuted and asylum seekers could be processed outside the UK and handled differently depending on their route. Supporters and advocates justify these new measures as “firm but fair” and necessary to ensure immigration challenges are addressed head on. The refugee community and those opposing the bill, however, warn that it will make things worse and further endanger lives.

In light of recent events – such as the 27 people who tragically died attempting to cross the channel last month as well as the thousands seeking safety after fleeing the Taliban in Afghanistan – there is heightened pressure to improve the country’s immigration policies and practices. Home secretary, Priti Patel, calls the new bill “firm but fair” and insists that its clauses will reverse the migrant crisis by speeding up processing, cracking down on people smugglers and removing “dangerous foreign criminals”. This strategy has misguided focus which relies on a number of misrepresentations such as the myth that there is an escalating number of people attempting to enter the UK and that the crisis is caused by human traffickers (see our Migrateful Mythbusters on this topic). Many activists, politicians, experts and international organisations have condemned the bill as Draconian and extremely harmful.

Stripped Citizenship with no Warning

In a move recognized by critics as ensuring the repeated mistakes of the Windrush scandal, the bill could make 2 in 5 people from ethnic minority backgrounds in England and Wales eligible for being stripped of their citizenship without warning. This applies even if they have never left Britain before. Powers to take away the citizenship of British nationals were first introduced as a counter terrorist measure after the 2005 London bombings and have steadily intensified over the years. The bill would mean the government would not be required to provide notification in cases where they don’t have contact details or if it is not “reasonably practicable” to do so. As Maya Foa, the director of Reprieve, observes, “This clause would give Priti Patel unprecedented power to remove your citizenship in secret, without even having to tell you, and effectively deny you an appeal. Under this regime, a person accused of speeding would be afforded more rights than someone at risk of being deprived of their British nationality. This once again shows how little regard this government has for the rule of law.” The Home Office’s response to criticism is that “…citizenship is a privilege, not a right”.

The UK government would have unprecedented powers to transport and indefinitely detain people – including torture & trafficking victims – in a third country to process asylum claims under the new bill. Australia is the key international example of this policy which has led to a well documented human rights crisis. Its government spends £8.6bn to detain 3,127 people in appalling conditions, while failing to end dangerous boat journeys. Former Brexit secretary David Davis warned that this practice could create a facility as notorious as Guantánamo Bay (US detention camp in Cuba) described as a “stain on the human rights record” with detainees making repeated allegations of torture, sexual degradation and religious persecution.

Featured in the bill are clauses that punish and criminalize asylum seekers based on the way they make their claims and the way they arrive in the country. This is despite the fact that it is difficult and often impossible for people to avoid applying for asylum in what the government would consider to be an ‘irregular’ way. Firstly, refugees who arrive in the UK via journeys which stray from recognized “legal & safe” visa paths would have less rights and entitlements purely based on their journey. They would be subject to shortened leave to remain periods, more restricted refugee family reunion rights and limited access to welfare. The UNHCR states that this way of categorizing refugees is discriminatory and incompatible with the Refugee Convention which the UK played a central role in drafting in 1951. It details that the status of an asylum claim should not be dependent on the mode of entry into a country. Additionally, despite government claims, there is a complete lack of evidence that this policy will prevent irregular passage.

Secondly, it would become illegal under British law for a person to arrive in the UK without permission to enter from immigration authorities. This, however, is the way that the vast majority of migrants seek asylum in Britain. They will face prison sentences of up to four years if the bill became a law. This criminalization of asylum is recognized by the Refugee Council to have the potential break up families, causing large numbers of migrant children to be separated from parents and placed into care. This has been seen in the U.S. It is also predicted that the prosecuting and imprisonment of asylum seekers could be £400 million higher than the present system.

The bill would make it illegal for boats to rescue people at sea by taking them ashore, even if there is no payment or criminal gain. Recent amendments making coastguard coordinated efforts exempt do not account for rescue operations if the UK is not the nearest place of safety or if there is not “good reason” for taking refugees there. Border staff would also receive immunity in the case of migrant deaths during “push backs” – something which immigration lawyers are calling a breach of international and domestic law.

What Action Can be Taken?

To take action, you can sign this petition to remove clause 9 (stripping citizenship without notification) from the bill before it passes in the House of Lords. You can also contact your local MP to express that you oppose the bill and would like them to act against it. Find your MP by using this finder function on Parliament’s website. Continuing to spread awareness and counter misrepresentations – e.g. through conversations and social media posts – in the discussion around UK migrants is also important.

Our Response to the UK Government’s Proposed Asylum Reforms