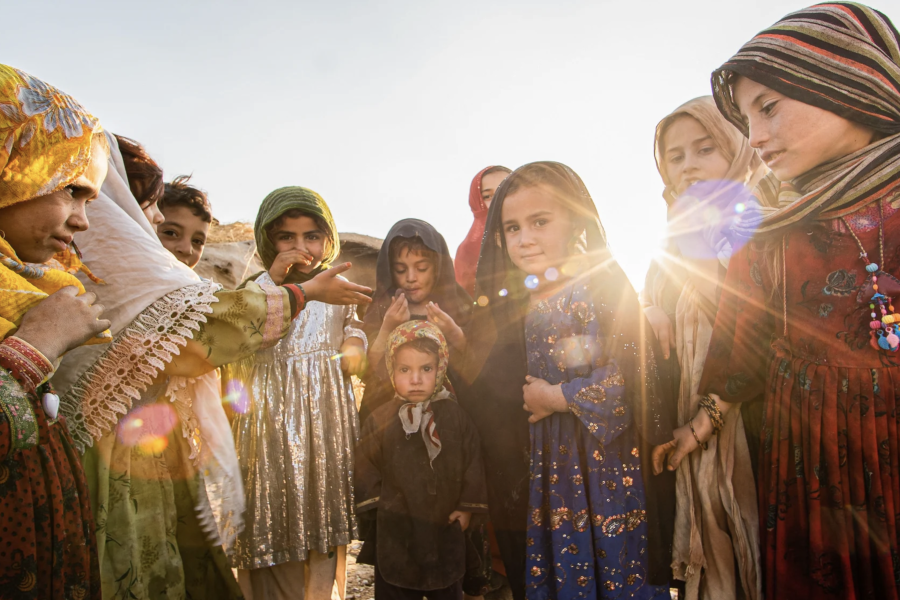 Young girls whose families have been displaced by violence, in Kabdahar. Photo Credit: OCHA / Charlotte Cans

Izzy Monnickendam has supported Migrateful since August 2021 as an Operations and Recipe Development Officer, and as a Facilitator and Volunteer. She is a researcher in development, economics and migration having recently graduated from Oxford University with a masters in Migration Studies. She has also written for the Centre on Migration, Policy and Society.

Afghanistan came into the spotlight last August when the US withdrew its troops. But why did it have troops there in the first place? A look back to the origins of the conflict reveals how the ‘war on terror’ in Afghanistan has had ramifications not just for Afghanistan’s economy, people and culture but for the way it is perceived by others. For most in the West, Afghanistan has become synonymous with conflict, with detrimental consequences for achieving peace and stability.

Origins of the Conflict

There has long been Western involvement in Afghanistan, with the British fighting against perceived Russian influence in the region in 1878. It was, however, the communist coup in 1978 that turned Afghanistan from a largely peaceful country to a country fraught by civil and proxy wars.

“Before the Taliban came, there was conflict already. The Americans were trying to kick out the Russians. How the Russians got in the country was exactly how they came into Ukraine now. They destroyed everything. When the government collapsed, the army collapsed. The parties were supported by the US and intelligence services. Different parties were created around this time. All the parties started fighting with each other, this is how the Taliban came in.” – Habib Sedat, Afghan Chef and Migrateful Trustee

The Taliban emerged in the 1990s as a hard-line Sunni Islamist group. They rapidly gathered strength and overthrew the existing regime, capturing Kabul in 1996. Two years later they controlled 90% of the country, buoyed along by the public’s support who saw them stamp out corruption and make swathes of the country safer. But the positive changes they brought for the Afghan people were accompanied by a strict interpretation and enforcement of Sharia law, which not only entailed gruesome punishments for minor crimes but controlled the way men and women dressed.

“There was a huge difference after the Taliban came to power. When we look at the picture of when the Taliban started the enforcement of Sharia law compared to what was going on before, it’s hard for people to imagine. They came from the mountains and countryside and forced everyone to think like them so that they could do what they want. They stopped girls from their education, they forced them to go and get Islamic education in the mosques. In the mosques, at that time, there is lots of evidence about what was going on: children – even under 10 – were being raped, all of this was going on. Everything they have done in the name of Sharia law was to try to prepare things for themselves, to reach peoples’ children and money. This is all they have wanted.” – Habib

It was in this context that, following 9/11, al-Qaeda was being hunted down by the US. The Taliban offered Afghanistan as a safe space for al-Qaeda, given al-Qaeda’s assassination of an anti-Taliban leader and their shared ideologies of offensive jihad and strict Sharia law. The Taliban’s protection of Osama bin Laden, al-Qaeda’s leader at the time, was the first step on the road to 20 more years of instability, violence and conflict.

A US-led coalition (including the UK) invaded Afghanistan later in 2001. The Taliban rapidly lost control of the country and relocated to southern Afghanistan and its border with Pakistan. The coalition’s mission formally ended in 2014, leaving the Afghan National Defence and Security Forces in charge. International troops were scheduled to withdraw by 2014 but ongoing security concerns meant that this deadline was extended. There were continuing Taliban attacks and ongoing civilian casualties throughout this whole period.

The peace agreement between the US and Taliban in February 2020 created hope for a comprehensive and sustainable peace process. It provided a timeline for the withdrawal of US troops and the Taliban pledged to enter negotiations with the Afghan government. This hope was short-lived. Although there was a reduction in violence nationwide, the Taliban did not adhere to the ceasefire. They also began a new strategy which involved more targeted assassinations of women, judges and peace advocates. That half of the country’s population was in need of humanitarian support prior to the Taliban seizing Kabul last year reflects the dire consequences of 20 years of war.

In August 2021, US troops withdrew, leaving only enough to protect the US embassy. The Taliban took Kabul in just 10 days and violence intensified yet again.

Since the withdrawal of US troops and the Taliban’s national takeover, the Taliban have attempted to create an image of national unity and legitimate governance on the international stage. However, the ‘caretaker cabinet’ is all male and provincial governors are largely Pashtun and Taliban affiliates. This does not reflect the diversity of ethnicities, languages or genders of Afghanistan’s population.

The Taliban have suspended the 2004 constitution, creating a legal vacuum which has been filled by a strict interpretation of Sharia law. There are oppressive rules not just for girls (who are not allowed to return to school) but for small farmers hit by insecurity and economic crises (who cannot supplement their income by harvesting poppies). Human rights advocates and media workers continue to be targeted.

“The Taliban, they destroyed everything. Every single woman is inside the house locked in and not allowed to go out. Single women have absolutely no rights. People can’t feed their children. A lot of horrible things are happening. As a person myself who served all over the country with the international forces, I have watched for a long time – 13 years – what was going on at every angle. Development in the country has been destroyed.” – Habib

Conflict and economic crisis often coincide. Since the Taliban’s takeover, development assistance has been withdrawn and US-held assets have been frozen. 95% of Afghans do not have enough to eat. While military offensives and conflict-related security incidents have declined, there has been an upsurge in crime, child marriage and irregular migration. Risky irregular migration has become an economic lifeline for families, with young men with limited education crossing the border to Pakistan or Iran to find work. Meanwhile, security and development issues have fomented both short term and protracted internal displacements, whether to remote camps or big cities. Irregular migration and internal displacement are options for those who cannot afford the journey to claim asylum in Europe or the US.

An unusual and important feature of displacement from Afghanistan has been high levels of return migration and back and forth movements. Migrants have been forced to return, largely because they have been deported by the governments of Iran, Pakistan or European countries. These forced returns are problematic as they reinforce rather than aid socioeconomic hierarchies and have negative economic, psychological and social consequences for Afghan communities. Often, those who return arrive in a country that they left when they were young and they do not call Afghanistan home.

Looking back over the origins of the conflict and seeing the current challenges Afghans face, it is easy to see why Afghanistan has become synonymous with conflict. In the UK, we frequently see simplified representations in the media where the majority of articles about Afghanistan concern kidnappings, bombings and discrimination against women. Even the Guardian’s series of articles ‘Afghanistan: the left behind’ reproduces one-sided portrayals of Afghanistan as a place of extreme violence and destitution. With exceptions, the Taliban is likewise depicted as a homogenous and backwards group prone to violence. It is unsurprising that Afghan migrants appear in the media with a similar lack of nuance, repeatedly presented as criminal perpetrators. These stories unavoidably fuel fearmongering about the ‘migrant crisis’ and help justify the inhumane Nationality and Borders Act.

The media influences and is influenced by the public’s perceptions. Afghanistan is not merely a country but an imagined place in the minds of people around the world. For most, our imagined Afghanistan is dangerous, extreme and deprived. As well as simplistic presentations in the media, Afghanistan’s synonymity with violence has arisen due to the protracted nature of the conflict and ongoing civilian casualties. In turn, this has rid Afghanistan of its culture and has rid Afghan people of their diversity, strength and humanity.

We all need to actively engage with citizens and cultures of ‘war-torn countries’ to challenge victimising and one-sided perceptions of other people and places. Untold Narratives has achieved this in a way that allows anybody and everybody to get involved. Working with writers marginalised by conflict, they develop, translate and amplify their work, culminating in the release of their book My Pen is the Wing of a Bird: New Fiction by Afghan Women. The focus on women’s voices in particular helps us understand Afghanistan more truly and holistically than from Taliban press releases, opinions of foreign journalists or reports from international organisations. Importantly, it highlights the universality of living in Afghanistan: many of the women face daily challenges that we face too. Don’t we all wish to be as innovative and determined as Haksa, who makes and sells biscuits to support her family following the death of her husband? Even stories that are contextually very different from our own lives reflect moral values that we can empathise with. When Ajah Ayyub digs a channel to divert floodwater from her village, uniting the women of the village in the process, we cannot help but admire her tenacity and self-belief that enables her to challenge the status quo.

Migrateful’s work is similarly vital in creating opportunities to see Afghans not as victims but as individuals who are skilled, friendly and strong, and who you can connect with over a meal and glass of wine. Moreover, ensuring that we support the welcome of Afghan – not just Ukrainian – people to the UK is a moral obligation given the UK’s involvement in a war against Afghan people who had nothing to do with 9/11, and a way to empower Afghan women, societies and cultures.

Seeing Afghanistan as more than a place of conflict is not to dismiss the everyday obstacles that Afghans face and the long road ahead to peace and stability. It is instead to enable us, first, to imagine the possibility of an Afghanistan that is safe, peaceful and thriving, and second, to fight with Afghan people to achieve this imagined reality. No one can work towards a cause if they cannot imagine it ever happening.

Lebanon after the Beirut Explosion ​